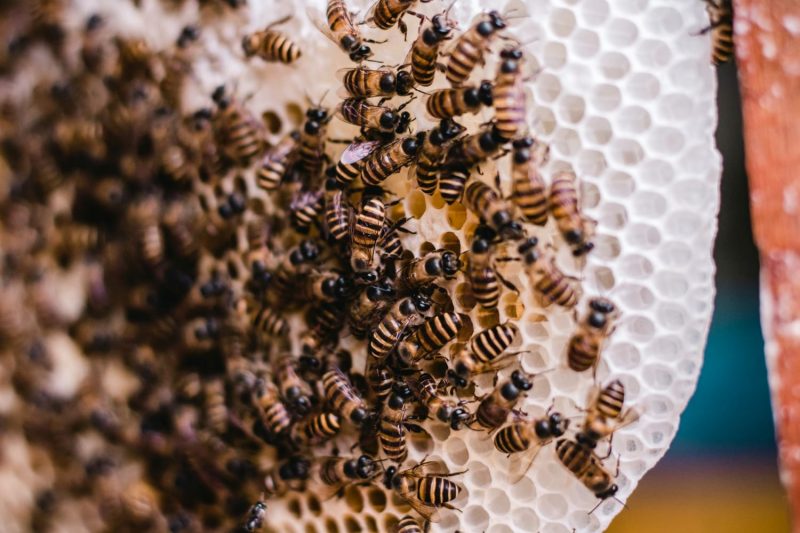 Nevertheless, while the Africanized bees pose a threat because of their more aggressive attacks than the honey bees, they are especially lethal.

You thought ice-cubes for dogs was excellent news? Bet you hadn't had about Africanized bees. But what is the difference between honey bees and Africanized bees? The story of how the killer bees got to North America is legendary.

Nevertheless, while the Africanized bees pose a threat because of their more aggressive attacks than the honey bees, they are especially lethal. Consider the bees a problem and contact the specialists to handle the bee nests.

The exterminator will also tell you the difference between the Africanized bee and the honey bee during the home inspection.

How the Killer Bees Got to the U.S.

Before we get into the African bees vs. honey bees details, let's first examine the killer bee's history. Like learning how to entertain a dog, the Africanized bee origins are fascinating. It is an interbreed of African bees and the standard European honey bee.

Biologist Warwick E. Kerr first bred the bees in Brazil. Kerr wanted to create a bee breed that would adapt to the South American tropical conditions and be hardier. The aim was to make bees that would be the best honey producers in the region.

A unique apiary kept these bees away from other bee breeds. Special screens called excluders protected the bees from mixing with the native bee population and protected them from larger bees like the queen.

Kerr noticed the first difference between honey bees and Africanized bees, which was that the killer bees were more aggressive. They also defended a wider radius around their hives.

In 1957, another beekeeper's visit prompted Kerr to move the killer bees because his workers were facing challenges with maneuvering around the excluders.

As a result, 26 swarms escaped, interbred with the native bees, and spread throughout South America. Soon they spread to the north, making the oil field in San Joaquin Valley in California the first location they were spotted in 1985.

The killer bee is, thus, the most invasive species in American history.

What do killer bees look like? Is there a distinction between them and the honey bees? Not really, the only way to tell them apart is to look at their sizes: The Africanized bee is smaller than the European bee.

Scientists still find it tricky to compare the two, but they even study the body colors and the veins in the wings to create a distinction, among other factors. However, to the naked eye, it is easy to confuse the killer bee for the regular bee.

Therefore, if you see a hive, instead of getting rid of it, do what you do with a professional pet sitter, call a pest specialist to deal with your unwanted beehive.

Honey bee vs. killer bee, which is more poisonous? The killer bee hive, but not for the reasons you think. All bees contain venom in equal measure. However, the way the honey bees attack is different from the way the Africanized bee attack.

The killer bees attack in a more aggressive manner and more significant numbers. Hence, one person might have hundreds and hundreds of stings. The combined venom, as a result, can be dangerous, even fatal.

Hence, the primary difference between honey bees and Africanized bees is the aggressive and defensive nature of the killer bees over the honey bees. Also, the Africanized bees tend to defend their hives on a larger radius than their counterpart.

One other difference between the two is the size of the swarms or colonies; the killer bees are usually smaller. But more bees will attack from the Africanized colony than from the European colony. Hence, the killer bee swarm will look larger. Keep in mind that Africanized bees can be harmful.

If someone gets too close to the nests, the killer bees will attack to distances that reach 1640 feet or 500 meters from the hive.

How Many Stings Does The Bee Have?

Like all bees, the killer bee has one sting, and it dies right after because they disembowel once they sting. But one victim can be stung about 500 times or more because the number of bees summoned to attack a perceived threat is numerous. This can cause severe reactions to anyone, even to those that have zero bee sting allergic reactions.

What To Do If You See One

Now that you know the difference between killer bees and honey bees, we've answered the question, "what does a killer bee look like?" let's determine what you should do should you encounter killer bees.

Determining whether the nest you've identified is a honey bee or a killer bee nest is hard. Hence, contact a pest control specialist if you spot any bee nest near your pets, family, home, or at your neighbors.

The expert will identify the type of nest and remove it safely. Once removed, the bees are transplanted in suitable locations. While you are busy deciding whether to pet sit or board and finding the best places to get vaccinations for your pet, remember to get an epinephrine kit for yourself.

You never know when you might encounter a killer beehive.